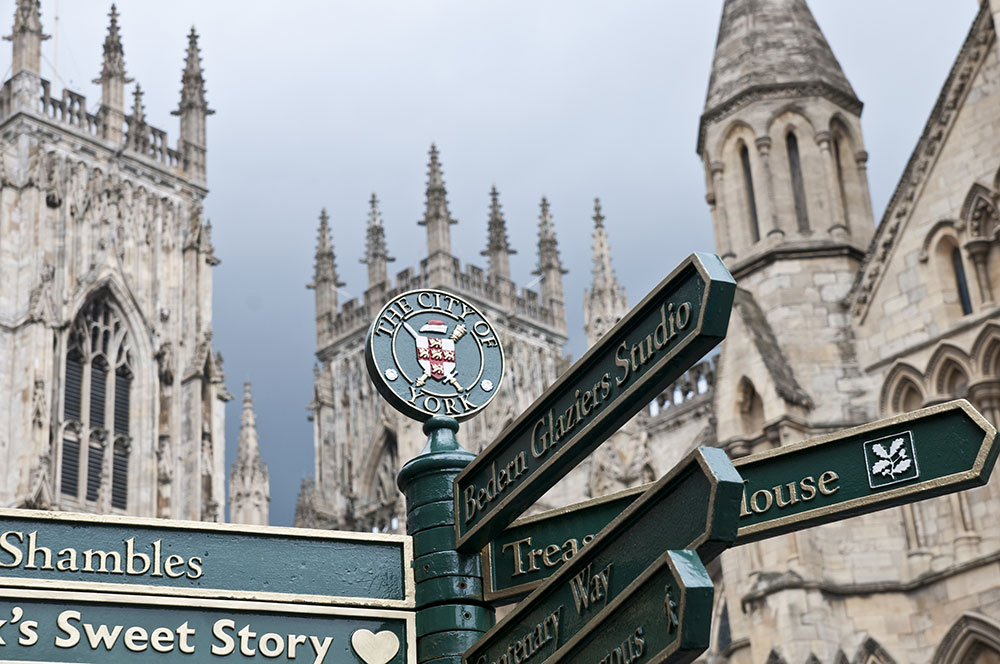 York – Trains from London to York

York is one of Europe’s most inspiring cities, situated in North Yorkshire at the convergence of the Rivers Ouse and Foss. Protected by ancient city walls, it boasts an impressive mix of old and new customs, architecture, events and entertainment. With its roots in a combination of Roman, Viking and Medieval cultures, you’ll find an ever-changing landscape with a wealth of places to explore and things to do. Plus, it’s really easy to get to by train.

The Ouse riverside is a perfect place to enjoy live music and street performances, or simply watch the world go by; but you could just as easily choose to move in the sleeker circles of the vibrant cafe and bar culture, or immerse yourself in the local nightlife.

Famous for its cathedral, York Minster, and its proximity to the Yorkshire moors and other National Parks, as well as being home to some world-class museums and a host of festivals throughout the year, there is something for everyone in York. The train station is also a significant point on the National Rail network and has excellent transport links by rail and road alike.

Things to do in York

The iconic York Minster is one of the world’s most recognisable cathedrals, and a magnificent example of Gothic architecture. Dating back to 1220, York Minster was built on the site of the Roman Emperor Constantine’s home, and over the years it has also been the final resting place of many Archbishops. Featuring breathtaking Medieval stained glass windows and stunning stonemasonry, York Minster is currently part of a Heritage Lottery Fund restoration and conservation project to help protect one of the most culturally significant monuments in the UK.

The National Rail Museum is the largest railway museum in the world, with over 1 million visitors every year. Covering 300 years of rail history and housing hundreds of thousands of intriguing objects relating to trains, this fantastic museum is a must-visit in York.

Visitors curious about its Viking heritage must visit York’s JORVIK Viking Centre. Built on the site of the original Viking settlement, this is one of the UK’s top attractions and really brings to life what it was like to reside in Jorvik over 1,000 years ago. The recreation of York in the Viking era is a fully sensory visitor experience, with unique and memorable sights, sounds and smells.

There is also a great deal of grisly history relating to York. Scores of executions took place at the York gallows, including that of the famous highwayman Dick Turpin, hung in 1739. Public executions were rowdy affairs, the atmosphere similar to that of a football match today and it’s said that York is now haunted by a number of ghosts including hanged men, Turpin’s spectral horseman, dying soldiers and even a ‘groping’ ghost, said to be that of a lecherous lord in the 17th century. Find out more about ghosts, witches, the life and death of Guy Fawkes (born and bred in York), executions and what it was like to be a Gladiator in Roman York at the York Dungeons. The Dungeons evoke the terror of those times and invite you to join their interactive tours – but be warned, it’s not for the faint-hearted!

Clifford’s Tower is another must-see for all visitors to York. Dating back to the 11th century, it was originallly built by William the Conqueror but rebuilt in the 13th century by Henry III having twice been burnt to the ground. The Tower’s namesake, Roger de Clifford, was hanged by chains from its walls having been found guilty of treason against Edward II. This medieval monument is a powerful part of York’s history; take a wander up to the Tower for stunning views of the city and the beautiful countryside beyond.

There are so many other things to see and do in York, including more award-winning, world-class attractions. Step back in time and experience the life of the Royal Family through the ages, take a riverboat cruise on the Ouse; visit the Yorkshire Museum or the York Castle Museum. Look inside the Merchant Adventurers Hall, the Quilt Museum and Gallery or visit Fairfax House, an architectural triumph and one of the finest Georgian townhouses in England.

As well as many regular Royalty-themed events, York’s music and cultural scene has a full calendar of events – why not treat yourself to a weekend away? Get yourself some cheap train tickets and visit Yorkshire!

The Spring Festival of New Music celebrates the music of today, with live concerts, talks and events that bring together composers, musicians and music lovers. Held in May, this eclectic event is now in its 25th year.

The Galtres Festival over the August bank holiday weekend is a perfect family event, with music, performances, local produce, children’s workshops and lots more besides. 2011 is the seventh year of the festival, and attendance is expected to be the highest yet.

York’s annual Carnival is a lively event, filled with music and fun and some really outrageous costumes! The Jorvik Viking Festival in February is a rather more combative event, with battle drills, re-enactments and river races as well as encampments, story-telling and authentic arts and crafts.

If you fancy stepping back in time, why not also try the York Roman Festival, held in June? At the end of the 3rd century, York was the capital of the Roman Empire; join this fantastic event and get caught up in the spirit of the Romans with battle re-enactments, music and crafts.

CAMRA Beer and Cider Festival comes to York in September, and the York Food and Drink Festival takes place a week later, so you won’t be short of refreshment! However, for the more cerebral visitor, the York National Book Fair takes place in the same month and specialises in out-of-print and rare, antiquarian books. The largest festival of its kind in Europe, expect to find more than 50,000 books for sale at the venue (York Racecourse).

York’s calendar of events wouldn’t be complete without a Ghost Festival, held in the week leading up to Halloween.

December’s Festival of Angels takes you into a magical world of glittering ice sculptures, guaranteed snow and lots of mulled wine; just in time for Christmas!

Travel and transport in York

York has fantastic transport links and is well served by trains going up and down the country. It’s one of the most important junction stations in the network, about half way between London and Edinburgh on the East Coast Main Line and is also a terminus for some of the east to west trans-Pennine routes.

The first railway station in York opened in 1839 and was a simple wooden building on Queen Street, previously the site of of the Hospital for Poor Women. It was replaced in 1877 with a grand, Italianate building designed by Thomas Prosser and, when it opened, York station was the centre of the British rail network, and the largest station in Europe. Following post-war improvements and repairs, the station was restored to its former glory and today sees a footfall in excess of 11m passengers per year – that’s a lot of train bookings!

Within the city itself, there are taxis and buses as well as a Park and Ride scheme operating from five sites on the outskirts. Cycling is very popular; York is the top UK city for cycling with 15% (against a national average of 3%) travelling to work by bicycle.

The city centre is pedestrianised – all the better for finding your way around the narrow streets and discovering all its treasures!

Other information about York

Close to the Yorkshire Moors, the city is a common jumping-off point for all sorts of outdoor sports including walking, hiking, kayaking, rock-climbing and abseiling. Football and rugby are popular in the city as is cycling and rowing. York Racecourse is situated just outside the city and attracts visitors from all over the country with an enticing race and events calendar. Check out our cheap train tickets and make York your next destination!

Want to keep in touch?
Sign up for our newsletter

Our most popular destinations

† Fares sourced from www.MyTrainTicket.co.uk. Prices based on cheapest available one way Standard Class Advance ticket, excluding booking fees. Prices are based on payment with a debit card and ticket collection from the station. Saving calculated against cheapest fare available on the day.